With the new 1961 series, Arendal now offers the proven technology and thrilling sound of the 1723 models at a remarkably fair price.

The Norwegian manufacturer Arendal has repeatedly received excellent test ratings for its extremely dynamic sounding 1723 series loudspeakers. With the new 1961 series, Arendal now offers the proven technology and thrilling sound of the 1723 models at a remarkably fair price.

The Arendal brand promotes healthy local patriotism, as the company headquarters are indeed located in a small town called Arendal. Also, the name of the “big” 1723 series refers to the founding year of the little town. Of course, the new 1961 series was also named after a date steeped in history because, on October 21, 1961, Arendal was connected to the island of Tromøy by a 400-meter suspension bridge over a fjord.

The 1723 series, introduced a few years ago, has gained a strong reputation, especially among home cinema fans. Thanks to potent drivers and their very robust, low-resonance cabinets, the speakers of the 1723 Series deliver brute dynamics as well as excellent dispersion characteristics and can even boast a THX license. However, the 1723 models may be a bit too powerful for some living rooms, and as a 5.1 or even 7.1 setup, they are not exactly a real steal. Therefore, with the new 1961 line, the Norwegians have created a more affordable and, in terms of dimensions, a more manageable product range, which should be exciting news for a larger target group. Like the bigger siblings, the 1961 line also offers a wide range of models. It includes the 1961 Tower floor-standing loudspeaker, the 1961 Monitor, the 1961 Center 1961, the compact 1961 Bookshelf shelf loudspeaker, dedicated 1961 Surround speakers, the 1961 Height Dolby Atmos compatible top- or wall-mount speakers, and two powerful subwoofers called 1961 1S and 1961 1V. For our review, we have put together a set consisting of Tower, Center, Surround, Height, and the 1961 1S subwoofer – ideal for discerning home theaters with 5.1.2 multi-channel sound.

Visually, the new 1961 models are as simple and straightforward as their larger sisters in the 1723 series. Their matt lacquered cabinets are of first-class quality, robustly built, and trimmed to minimal resonances with elaborate internal bracing.

As is usual with Arendal, only self-designed drivers have been used to meet the extremely high demands on low distortion, linearity, dynamic range, and power handling. Even though the 1961 models have quite handy dimensions, the developers did not want to compromise on sound quality and wanted to retain the typical Arendal sound even in the more affordable series. From a technical point of view, the 1961 mid-bass units are somewhat smaller versions of the 1723 drivers, but the 1961 woofers with 115 mm cones are still capable of handling enormous loads and will not be unsettled even by brute force. For a wide dispersion in the high-frequency range, Arendal also relies on the proven 28 mm dome tweeter in the 1961 series, which, together with a large horn in front of it, forms a so-called waveguide tweeter. This design ensures optimum dispersion characteristics and maximum dynamic range.

“the 1S delivers enormous depth and robust sound levels despite its compact housing.”

For the front channels, we use the approximately 83 centimeters high 1961 Tower floor-standing loudspeakers. Four drivers with 115 mm diameter work together with the 28 mm waveguide tweeter in the loudspeaker’s slim ported-enclosure. In addition to the bass, the two upper drivers also radiate the mid-range in a 2.5-way arrangement. All in all, that’s enough membrane surface for a rich, dynamic performance. The top of the tower’s housing offers a perfectly fitting set-up area for the 1961 Height speakers, which as upﬁring speakers, provide for the Dolby Atmos sound information. Alternatively, the slanted 2-way Height Speakers can also be mounted on the wall or under the ceiling, as these compact speakers are highly versatile. For the rear channels, the 1961 Surround speakers are dedicated home theater specialists. Thanks to a TriAxial construction with two additional full-range drivers installed on the sides, these speakers deliver a mixture of diffuse and direct sound field – ideal for home theater applications. The center channel is powered by the approximately 42 cm wide 1961 Center. With a double configuration of 115 mm bass-midrange drivers and 28 mm waveguide tweeters, it offers sufficient potential for powerful and broadband dialog reproduction.

(captions page. 31)
– Four woofers provide an enormous dynamic range in the slim 1961 Tower. The two upper drivers also take care of the midrange reproduction
– Thanks to 550 watts of power, DSP, and a 260 mm diaphragm, the 1S delivers enormous depth and robust sound levels despite its compact housing
– The amplifier module of the 1961 1S subwoofer has three fully parametric EQs for perfect adaptation to the room acoustics

Even though the 1961 Tower can already deliver rich bass, a subwoofer is a must for real home cinema fun. We chose the closed subwoofer model of the series, the 1961 1S, because, despite its smaller dimensions, it offers a slightly drier reproduction compared to the 1V bass-reflex model. It delivers almost the same sound pressure level and is even a bit cheaper. The lynchpin of the 1961 1S is the powerful 12″ driver, which ensures maximum and undistorted dynamics with an incredibly powerful magnetic drive, an enormously resilient voice coil, and an extra-stable diaphragm. This driver is driven by a newly developed amplifier module called Avalanche 550 IQ, capable of delivering a massive 550 watts (RMS) of power. The real highlight of the Avalanche module is the built-in signal processor, which, in addition to the usual settings for crossover frequency and level, also provides a wide range of tuning options for the subwoofer. The 1961 1S offers three fully parametric equalizers, adjustable low-cut or subsonic filters, individually adjustable switch-on and switch-off timing, and triggering options through the connected sources.

There are only positive things to report from our measuring laboratory because the Tower, Center, Surround, and Heights stand out with their remarkably linear frequency responses and excellent dispersion characteristics. Even at an angle of 30°, the Arendal 1961 speakers maintain a balanced reproduction quality, a feature that is particularly beneficial to the center speaker.

Distortions are kept at a minuscule level, with only minimal resonances around 1.5 kHz in the decay spectrum of the 1961 Tower. Also impressive is the active subwoofer 1961 1S, which runs down to 20 Hertz without any further correction via EQ – spectacular!

“an impressive loudspeaker set that easily meets even the highest demands and is a lot of fun!”

The Arendal combo also cuts a first-class figure in the listening room, as the 1961 series set is a lot of fun with its lively, almost explosive character. The Norwegian set never sounds strained or even aggressive but reproduces any material on all tracks. In addition to the crystal-clear center, we also like the precise and contoured spatial reproduction of dialogues and sound effects on the front channels and the gripping, enveloping sound field from the rear speakers. At the very bottom of the bass range, the 1961 1S does an excellent job of delivering bone-dry impulses, while the 1961 Heights used as Upﬁring speakers provide realistic Dolby Atmos sound from the direction of the ceiling.

(captions page. 32)
– The extensive range of models in the new 1961 series from Arendal offers a wide selection for every home cinema and hi-fi listening room
– Handy universal talents: The 1961 Height were used in our test as upﬁring speakers
– In the 1961 Center, too, all drivers were installed flush with the baffle, thanks to installation via threaded bolts from behind no screws are visible

The new 1961 series from Arendal opens up the fascinating world of detailed, dynamic film sound to home cinema fans at a more than reasonable price. The series’s loudspeakers are excellently crafted and fit into smaller home theaters thanks to their relatively compact dimensions. Arendal 1961 – an impressive loudspeaker set that easily meets even the highest demands and is a lot of fun!(captions page. 33)
– Two side-mounted 3″ broadband drivers turn the 1961 Surround into proper TriAxiaI speakers, providing a mixture of diffuse and direct sound.

Even at an angle of 30°, the balanced reproduction characteristics of the Arendal 1961 center speaker are maintained. The 1961 1S subwoofer delivers rich power down to an impressive 20 hertz.

+ 3-way EQ on the subwoofer 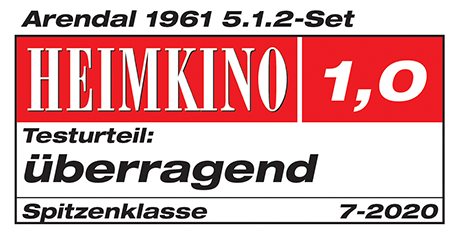